Tracing the Migration of the NYC Gallery District

We're lucky to be in one of the city's biggest gallery districts, Chelsea, and love being able to stroll around our area to see all of the wonderful shows our neighbors are exhibiting. But it wasn't until relatively recently that Chelsea became so synonymous with the art world. New York's galleries have had a long and winding path, matching the ebb and flow of the growth of the city itself. The first gallery district emerged in lower Manhattan in the early 1800s, with a small group of galleries clustering around City Hall.  They were not open to the public and were targeting an exclusive selection of wealthy clientele. They primarily focused on European work, with the exception of the Babcock Gallery, which was the first gallery to exhibit solely American artists. When those rich families began moving uptown to avoid the expanding population of poorer immigrants in the area, the galleries followed.  They first settled in Greenwich Village, but with commercial development happening faster and moving northward at an increasingly rapid pace, they continued moving uptown to Madison Square Park and then ended up in the 50s.  A district of about 50 galleries emerged by the late 1800s in an area bordered by the collection of department stores called The Ladies Mile to the south and the rough warehouse neighborhood, The Tenderloin District, to the west. 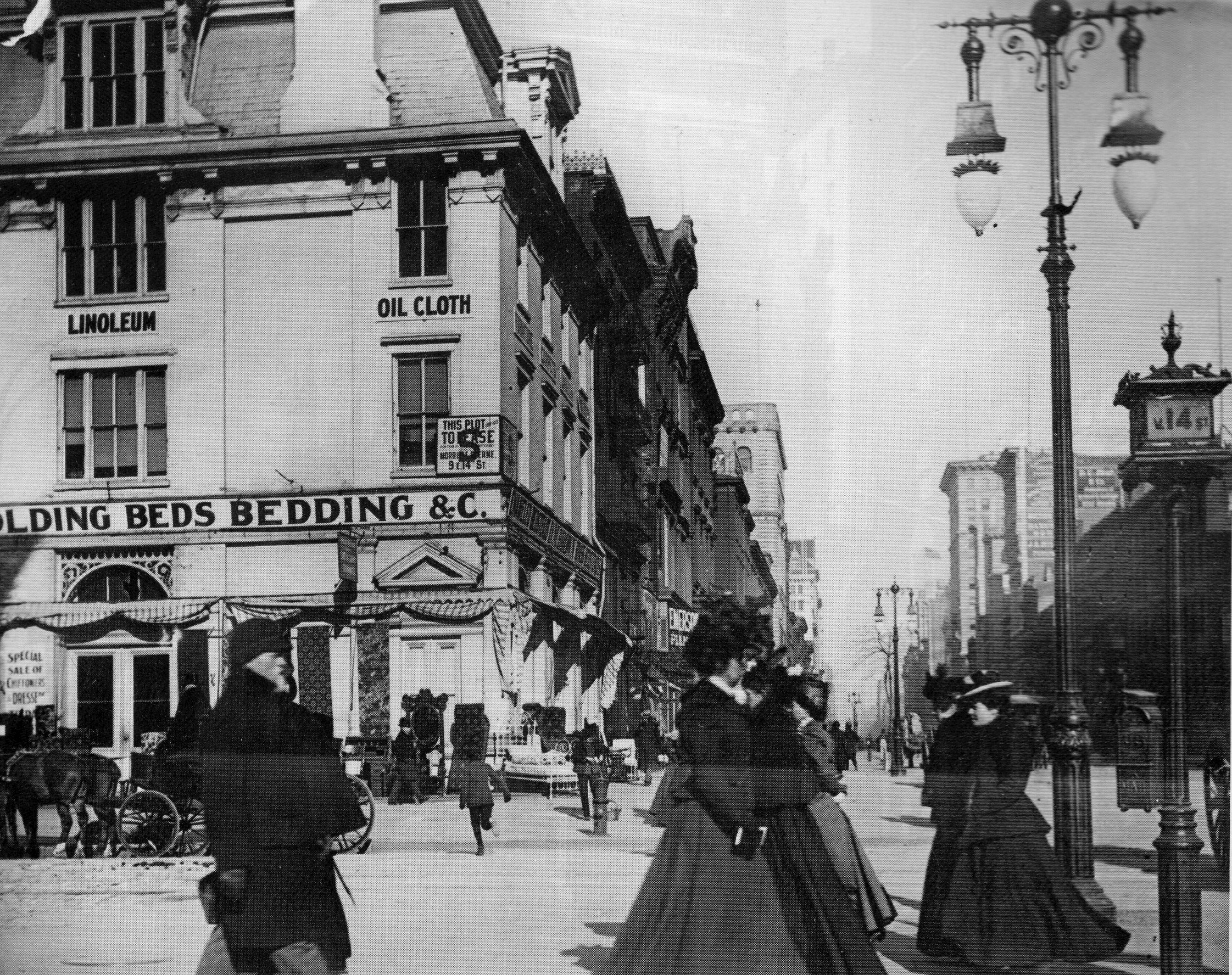 Near the Ladies Mile

With immigrants pouring into the city in larger numbers than ever before at the turn of the century, the wealthy families continued to try to outrun their spread uptown by moving to the Upper East Side.  Once again, the galleries followed, and the New Art Centre along 5th Avenue laid the foundation for the neighborhood that would soon house some of the most respected art museums and institutions in the world. The yet to be developed area allowed the rich to build giant mansion along 5th Avenue and Central Park, and they turned to the galleries to fill those walls with art, creating a boom for vast, important private collections. But along with the ultra-wealthy, other galleries began catering more to the Nouveau-Riche and the emerging upper middle class, beginning the transition of the art world into becoming more democratic. 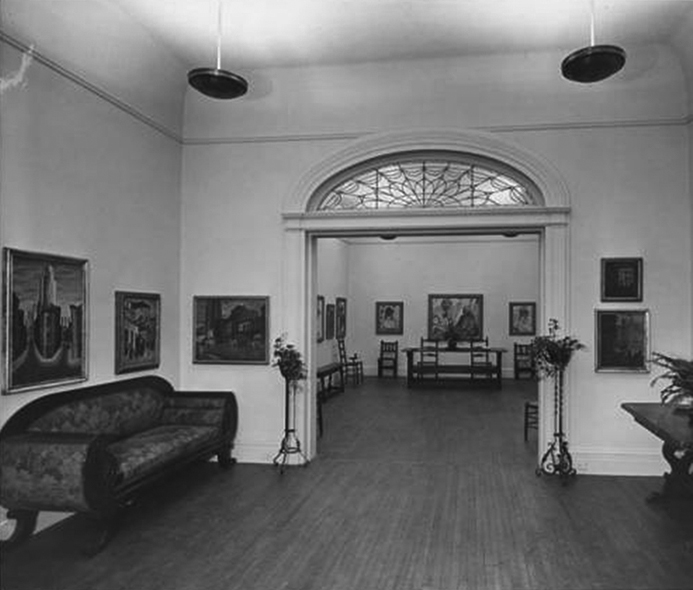 The Whitney Studio Club Gallery, photo courtesy of the Whitney

Meanwhile, back downtown, Greenwich Village was re-developing as an art center, building around the studios and co-ops that artists were flocking to for the cheaper rent and the community. The galleries that showed their work were more experimental and inclusive of lesser-known artists. It was in this area where Gertrude Vanderbilt Whitney opened her Whitney Studio Club Gallery in 1914, which would later evolve into the Whitney Museum for American Art.  By this time, there were around 140 galleries between the Upper East Side and the Village.  Many of them were still exclusive salons only open to select patrons by appointment, but there were some galleries that were beginning to be open to the public, the Whitney Studio Club Gallery included.

Sketching in the Greenwich Village in the '50s, photo courtesy of the Museum of the City of NY

Unfortunately, only about 30 galleries survived the Great Depression. Those that held out in the Upper East Side thrived on selling masterworks, the Modern Art that high society selectively accepted, and the better-known emerging artists. The galleries in the Village focused on more avant-garde work, distinguishing themselves by highlighting what's new and what's next in the art world. It was the root of the polarization of the art scene that still exists to this day.  New York's art world stayed stagnant for the next few decades, until the Postwar era brought both a big economic upswing for the country and a huge number of European immigrant artists. The roughly 90 galleries that existed in 1945 rapidly grew to 406 galleries by 1960, then to 761 in 1975. Unlike before, when the increasing art market followed the migration of the wealthy around the city, this period saw a distinct turn to galleries revitalizing neglected neighborhoods as they sought out cheaper rents and bigger spaces.

The first big expansion of the gallery district was to the areas of SoHo and TriBeCa, which were rife with loft buildings and abandoned warehouses that could be turned into studios and show spaces. Galleries that had been firmly rooted in the Upper East Side even started to move to the neighborhood, as the art world began to be viewed as the epicenter of everything cool and hip. Retailers, commercial spaces, and brands also wanted to capitalize on that elusive coolness, and flooded the area to bank on the association with the contemporary galleries. This started the vicious cycle that continues to plague the art world to this day, where that movement would drive the rent prices up, forcing the galleries (and artists, and poorer families) to flee to untapped neighborhoods, only for the high end stores to follow again, and repeat.

The Portrait Show at ABC No Rio, 1981, photo courtesy of 98Bowery

The next neighborhood to house the city's most exciting galleries was the East Village, but its reign as gallery district was brief, thanks to both the economic boom of the 80s causing rents to rise higher at faster paces and to the art world taking a huge hit with the AIDS crisis. There was a diaspora of artists, ever on the lookout for affordable places to live and create. Over the next decade, they primarily settled in the Lower East Side, West Chelsea, and in the Brooklyn neighborhoods of Williamsburg and DUMBO.  Out of these areas, Chelsea ended up having the biggest boom. The still rough-around-the-edges neighborhood had plenty of empty space to fill for accessible prices. An exciting mélange of smaller galleries showing emerging artists right alongside some of the biggest galleries featuring shows by the splashiest names developed into a bustling art district. By the early 2000s, there were more than 300 galleries in the neighborhood alone. The High Line in Chelsea, photo courtesy of Gotham

Now, there is fine art to be enjoyed all over the city, including everything from recently discovered contemporary artists to exclusive masterworks, catering to art student undergrads and Old Money collectors and everyone in between. Along with Chelsea, the art hubs still include the Upper East Side and the Village, along with SoHo, TriBeca, the Lower East Side, Williamsburg, DUMBO, Bushwick, and Long Island City.  If you're ready to dive in but are feeling overwhelmed, join us for a tour of some of our favorite Chelsea galleries.  Happy hunting!

How great, I was busy writing a review for my new dining app and wanted a piece of history and there you were! Just great1 Well I guess we ned to do something being VETERANS!

This is a very interesting blog, Kathy. Bravo!